These are the ideas I am supporting so far this month:

People on Facebook are posting about last nights Vesago.

The last time I saw Octavio was last week at the library:

I was getting a book for Elysia.

It was the first time I'd seen anyone since the last, now rare, trip to Nocturne.

And I don't feel any pang of having missed anything.

And I wake up to the news that my grandmother died last night...

Instead, I have to work, take Rez to the doctor's, cook dinner, clean, etc, etc, etc...

At least I have my Mom's back-up with getting Lissy from school and doing her homework...

Heater died completely at the end of January...Evacuated house due to fear of it blowing up...Over that weekend while mom was doing laundry, smelled burning again despite heater being off for a few days...Firemen found nothing...Took crew from company investigating why new heater wasn't working to tell us that the hose to the dryer vent is plastic (illegal) and is #1 cause of house fires...Rather than argue about something else, we install aluminum hose.

New heater was being installed...YAY, right?...No...They said new one was factory defective...Was actually too big for house...They get another heater...Come to work on it for 4 hours every day for a week...Valentine's Day they stay from 1 PM to 11 PM...Still not working when they leave...Chase them down street, stop car by standing in front of it, and rant...Realize it doesn't matter and return home hysterical...Mom can't talk me down, so in the most romantic Valentine's Day gesture ever, Bill drives me to Hall-Mercer...Blood pressure 181/94...Therapist talks to me for an hour...Says I have every right to be so frustrated, and that the stress will pass...Whole trip took an hour and a half, which has to be some sort of record.

We finally have heat and a shower(Oh, shower had to be torn apart, due to mold eeking out from under the tub surround), but heater and bathroom still not up to code...Have issues which landlord and repair man say will be done but have not heard from them in over a week...Repairman unexpectedly drops by while I'm at work to make sure heater is still running...Sure...Calls while we're eating dinner and leaves me a message to call him back, says he did not call me, odd...Says he'll be here Saturday to look at the issues in the house...Next day, we get a 10 day eviction notice for non-payment of rent...It also says he posted it on the property, which probably accounts for the visit where he did nothing and the phone call he "didn't make"...His story will be he dropped it off and I called him about it...Thank goodness for time-stamped phone messages...Rent is in escrow until L&I action is done...Thank goodness my Valentine's trip to Hall-Mercer made me get an attorney because I was overwhelmed...Lawyer laughed and said it's illegal...Good...Repair man, who is now identified as property manager, never showed on Saturday.

Saturday was nice...Lissy went to a birthday party down the block, and I went to a baby shower a few doors down...Let Lissy stay out and play longer than usual like I had the night before...Stopped home from the shower to change Rez...Lissy runs up the porch with a boy who is known trouble behind her...He complains she threw his hat in a puddle...I make her apologize, bring her in for bath and bed...I also apologize to him when I go back to the shower, but let him know he can't say he didn't do anything to provoke it...Fini?...No...His mom knocks on my door while I'm at the shower...My mom tells her where I am if she wants to talk to me...Instead, she waits until the next day...Yells at Bill when he steps outside...He says same thing my mom and I both said, "What do you want us to do? Wash it?"...She says something about it being about respect, not the hat...Tries to turn it into a racial thing...I come out and tell her it's not racial, and her kid is constantly harassing the girls on the block...She says the girls knock for him, which isn't true...Especially not my kid, since she's not allowed across the street...I tell her her kid's not all that, and she goes, "He's all that like his momma!"...So I get all ghetto back, throw my jacket open, and shout "I'm skinnier than you, bitch!"...She thought I was gonna fight her...I never left the porch...If she wanted me, she'd have to come at me...She went home and got a broom...Her husband and Bill rushed into the middle of the street and stopped her...The cops came...It was a mess...Over a fucking baseball cap.

Now, my medication isn't helping my anxiety like it was...Actually having pretty bad attacks...So I scheduled an appointment, despite not having insurance...Ugh...

It's pretty ironic how everything and everyone I'm responsible for is what keeps me together, despite all of the stress they come with.

My kid is an Honor Roll student! 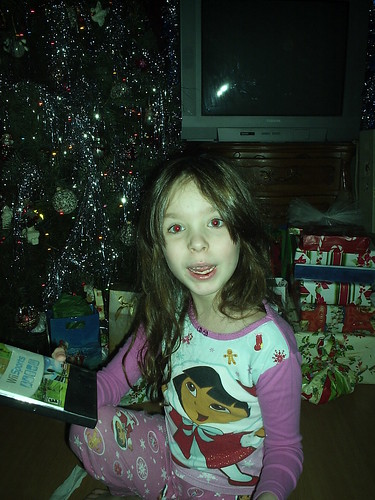 This image is my favorite from this Christmas...Elysia: confused, disgusted, angry, with still a little "Dare I dream..." in her eye...She screamed, nearly in tears, "But we don't have a Wii!" and shoved the game box back at Bill who made her happy by saying he would return it to get something for the 360 (which is happily back from RRoD-land)...My flash reset just in time to get the shocked pause that came from the next gift opening...Sadly, it couldn't capture the whisper to a scream of "oh. My. GOSH!" 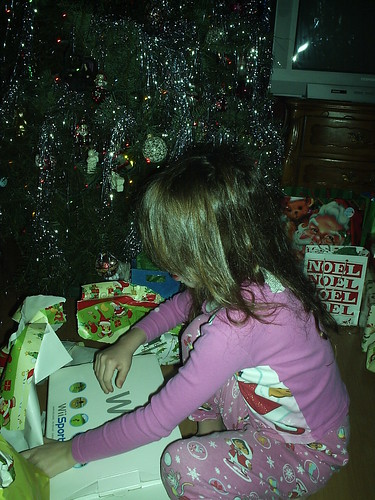 We'd had it since July...It was the hardest secret to keep, but it was also the best surprise ever.

Everyone told me to check the damn heater before the winter hit...It always just seemed too warm to do it, and the cold came on so suddenly...The hot water heater went on Saturday...You'd think I would have had the landlord do it while he was here fixing that on Sunday, but I was an idiot. (Also, I was preoccupied with the fact that the XBox finally got the dreaded RRoD.)...Last night, I went to turn the heater on, and the burners came on, but the blower didn't...That's not good when it's forced air heat...The landlord's son came to check it out tonight, but got nowhere...The landlord is coming himself to see it tomorrow...I understand that it's alot of money and the energy tax credits aren't effective for 2008...I understand more that I have an infant and a 6 year old who are now at risk for illness and who I can't bathe even with the new hot water heater in place...GRRRRRRRRRRRRR...

The only thing keeping me from a murderous rampage or a nervous breakdown right now is my belief that we can get through anything as a family.

Bill asked me if I wanted to just go to City Hall and get married today...I'm actually considering it as an option at this point...We're getting married no matter where or when...Stuck together forever no matter what...The how does not matter in the long run.

Talk about love keeping you warm...lol 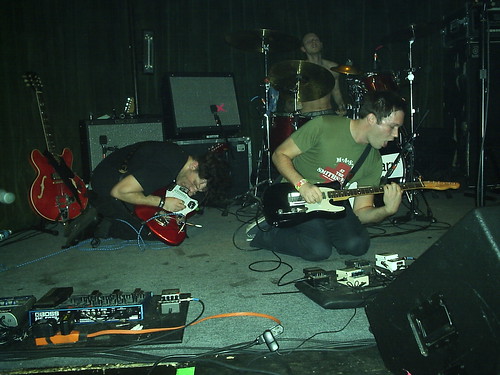 This is one of my favorite shots from last night. (Full Set)...stellastarr* put on an awesome show!...Hanging out with Jenn and Jeanne was lots of fun, too!

It was just really nice to have a night out to myself...I'd almost forgotten what it was like.

Now, back to my normally scheduled life, which is actually more awesome than it used to be. :)

The hormonal mood swing of doom made me so upset that I could not motivate mself last night...I wanted to do one of two things and since I had no tickets for either, though I probaly could have gotten them no problem for at least one, I sat and cried...I should have just gone to the New Kids show...I kept saying I didn't want to go alone, but I'm sure I would have run into people I know...If Bill and I had gone up to The Ritz for Bruce Campbell, I knew we'd run into people, but I didn't know if anybody would have extra tickets...So, upset and torn, I decided to just do nothing, except sulk and make everyone around me just as miserable until they or I went to sleep.

Obama win. (riot yet to happen)